Another Moving Day, It Feels A Bit Like Ping Pong

We finished up our week in Leavenworth with a round of disc golf. The highlights of the round was on my approach shot for hole seven and hole nine. I had to anhyzer left handed over the corner of the tennis court fence (very tall cyclone fence). I am still very inconsistent on any special shaped shots like this. However this shot flew high and at a very steep angle were it needed to go. We saw it crash into the trees to the left of the basket. After 15 minutes of searching for my disc back in the cat tail grass I was ready to call it, however, I went out and back into the tall grasses just past the basket. There, vertically nested in the grass, was my favorite pink Destroyer. Yes, I managed to throw PAST the basket. I am sooooo glad I decided to give it one last look further out. We often underestimate our throws. I did not get a par because the par throw was tossing through the trees out by the basket, that made my bogey putt about four feet. I was so happy to have thrown that far AND I managed to not lose my favorite disc!

On hole nine I threw three drivers (yes Hub and I often will throw multiple discs and pick one to finish with), my favorite pink Destroyer, the Latitude 64 Raketen that is so elusive for me and a new driver to me, a Discmania Crush. Of the three tees, I took the Raketen which, off the tee, went hard right like it wants to do. My second throw with it, I actually got the darn thing to flex nicely and land less than ten feet from the basket. I made my putt and finished the course with a par. 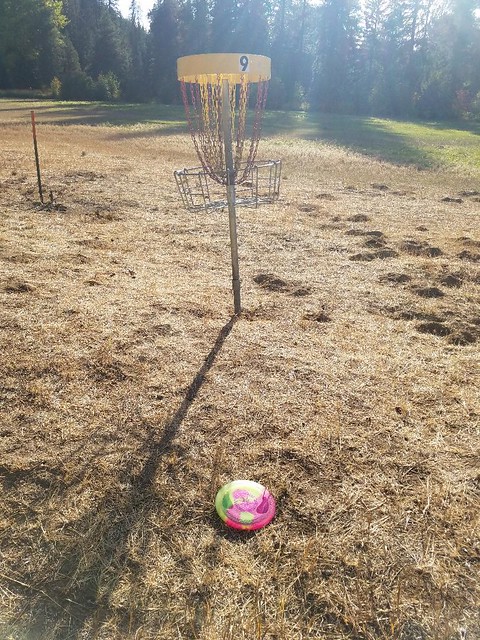 I didn't even start to pack up until 7:30 because I had to finish my swap cards for stamp camp on Saturday. It is grueling any time I have to make repeat cards and I made 19 of a similar design and layout, with slight variations in color.

Because we've now purged all our extra stuff, packing is much more streamlined and efficient. I did not sleep well for some reason so was very tired in the am. We no longer have piles of stuff on the couch or love seat! 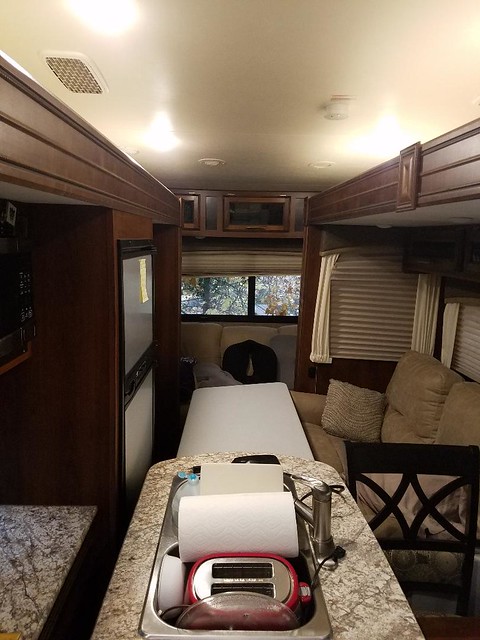 Hub reported that the truck handled Stevens Pass just fine. I can confirm that I heard no complaints from him during the trek. He is the type of driver who verbalize his issues and I heard none about the truck. I did get to hear about a variety of bad drivers.

I took lots of pics and got a short video of it snowing on Stevens Pass which I will process, load up on YouTube and will attach it here...

We are already looking forward to being in Texas in three weeks where we will slow down our travel schedule to three weeks per campground. It is already feeling like Ping Pong with one week per location. We will be here in Mount Vernon one week, then we move on to Bend, Oregon.

December Host Code for free gifts: FNBC47XY​ (do not use if your order is $150+ in merchandise)
Click here for details!