We Are Finally Somewhere NEW!

First I need to summarize our stay in Leavenworth. I finally got to check off an item from my bucket list. I wanted to stay a full three weeks in Leavenworth. It was lovely. It was also a great workout because we played disc golf twice a day almost every day. Even the first week, when I still had stitches from Carpal Tunnel surgery, I played right handed, or I would come along and look for Hub's discs (this is not as easy as it sounds!).

The fun really kicked in after I had my post-op appointment and I was able to play left handed (my dominant hand). The ground for most of the course is riddled with mole holes so you have to walk lightly, expecting the ground to be very bumpy. It was a great workout! I would say we averaged 7k steps per day. Oh, and there's a dry creek running through the course with a bunch of fallen tree parts, we learned that they are the home for many hornets, poor Hub was stung 5x. These are the big nasty hornets. So when I saw one, I would quietly sneak away from it.

In addition to choosing a camp site close to the course, we were lucky enough to get close to the lodge which meant free wi-fi! We already have an unlimited data plan, but it was very slow compared to the lodge's internet. At times the lodge internet would bog down, and even go offline, perhaps when alot of people were on it, but overall it met our needs. I believe that it must have an automatic reset when it gets too laggy, not a bad feature as that means its memory gets wiped and that this resort invested in a good system.

We are returning in a couple of weeks for a shorter stay at Leavenworth on our way back in to the city to finish up our medical stuff, and I have my craft retreat to attend.

Now on to the NEW place!

We are visiting two Eastern Washington Thousand Trails, leaving only one last Thousand Trails in Washington left to visit, but I will focus on where we just setup camp today. It is called Little Diamond and is a shared park, with three organizations, Thousand Trails, KOA and Encore Parks. I like to read the reviews before we get to a new resort so I am not caught off guard.

I look for reports on the cell coverage, amenities and overall satisfaction. Little Diamond reportedly had decent Verizon coverage, yay! It does not have any sewer sites, which is clearly marked online and on the ranger station building when you come in. So complaints about no sewer are silly since they don't hide this fact. Ok, so we took a site right across from the big field which is a multi-purpose area with the disc golf course, softball, and a golf driving range. It is going to be an easy course, which is a welcome break from Leavenworth, that was not what I would consider easy. I haven't walked the ground yet, but from our site the ground "appears" to be level.

I would agree with the reviews that many of the sites are very small, or even awkward, making it difficult to park even a shorter rig like ours in them. Here is a pic of one very awkward pull through site. One side is a huge rock, so nothing very large is going to fit AND there is NO space for a picnic table, or to put an awning out. Only the very tiniest of trailers will fit here. 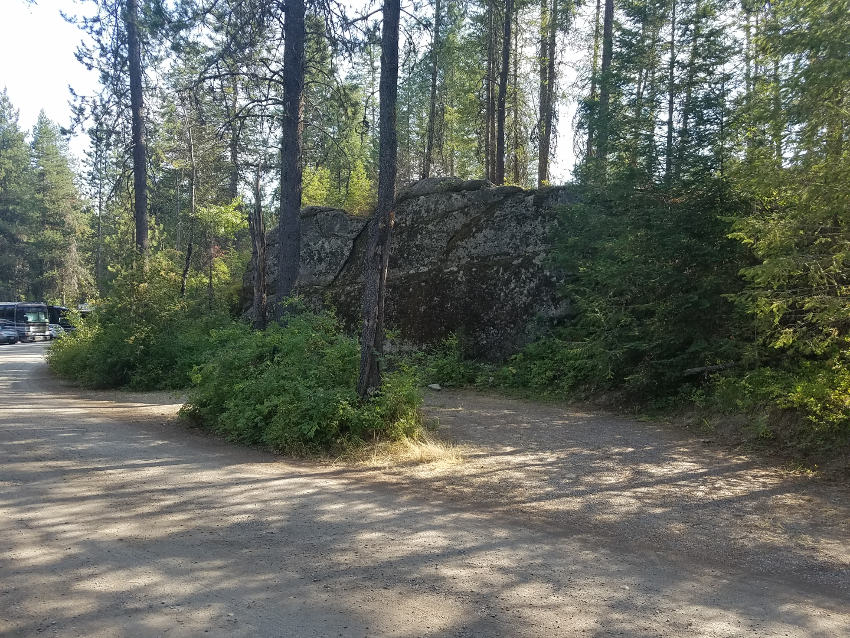 I took a drive deeper into the camping area and yup, lots of very rough, unlevel, no gravel shallow sites. But I also saw plenty of deep sites. You do need a map to guide you, it is a bit of a snarled mess to drive. I would not have liked to drive back there with our trailer. Now that I've driven it, I understand where to go now and would be fine.

We checked in around 1pm. At that time we were the only ones checking in. While we were parking, three rigs went past us, one was an Arctic Fox fifth wheel and we saw them come through three times before they stopped coming by, the sign that they'd found a spot. We had the choice of two spots across from the field, The other was taken by a big Class A RV, and I saw the third rig, a very long toy hauler parked in a pull through way in the back. I was amazed at how perfectly his slide fit between two trees, with just inches on each side. But he made it work.

There were plenty of spots back there for the Arctic Fox to fit in, I am not sure what they were looking for. There was even one more site up front that they could have taken. So who knows. Hub's strategy is sound, the first site he sees that meets our needs we take it and we never wonder if there was something better that we missed. People who think that way must find camping frustrating.

Ok, now back to our site. I can see a sliver of the lake, it isn't too far away. I see lots of towel wrapped families coming and going to the lake area, which is also where the family center and pool are at. I hear that starting tomorrow there will be boats to rent! It isn't likely something we will partake in. The dust here will be much less than Leavenworth. We both were dusting every day. And then there are the bees. I read in multiple reviews that the bees here are bad. And yup, when I hopped out of the truck to check in, I was surrounded by them. The dumpster across the way was teeming with bees. I am ok with bees, and we don't eat outside as a rule, so I don't think they will bother us much.

We don't look forward to Thursday which is predicted to be 105 degrees! That will put our AC to the test, and our fridge. We are in a shaded spot for most of the day, we will get direct morning sun, and some late afternoon sun. We haven't seen a single mosquito, /knock on wood.